Here is this week's Messenger column.

At a recent Garage Sale I came across some very old Huck Fabric. I wasn’t sure what I was going to do with it but I sure wasn’t leaving it behind. I was vaguely aware that it had been widely used for embroidered hand towels however I had no idea how it differentiated itself forms other forms of needlework.

Huckaback Embroidery is also known as Swedish Embroidery and Darning Embroidery and Huckaback Darning. Like all crafts Huckaback has enjoyed many revivals. Popular around the mid 1800’s its popularity waned until the early 1900’s. I found a New York Newspaper from the 28th February 1909 that reported “Beginners in embroidery should rejoice- huckaback work is back in first favour”, it goes on to state “as with every revival the modern darning on huck is more artistic than when it was popular 15 -20 years ago”. 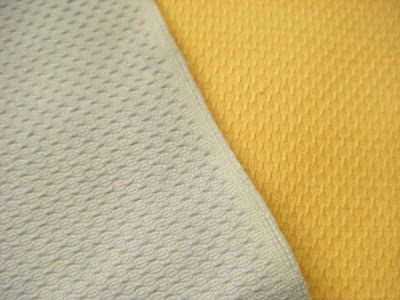 Huck fabric is a coarse absorbent cotton or linen fabric, the fabric I purchased was Irish Linen. It was renowned for never wearing out. I’m sure that my mother still has Huckaback table runners from her mother in use. Huckaback was taught in schools as it was considered a very easy and inexpensive form of embroidery. In Huck embroidery the stitches never pierce the fabric. Huckaback Fabric is characterized by well defined vertical floats. The thread is ‘woven’ through these floats creating the stitches. A tapestry needle is best as its blunt end will not split the floats. Prior to the early 1900’s silk threads were used exclusively but today #3 and #5 perle cottons are used as is stranded cotton. 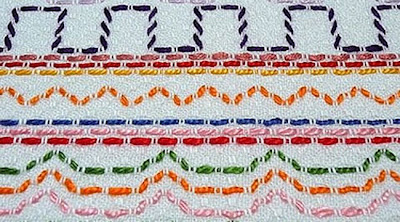 Traditional Huckaback embroidery showed the design on one side only; all the stitches ran in the same direction. The picture however shows that with a little artistic flair how effective this form of embroidery can be. Stitches run both vertical and horizontally to create an eye catching design.

Huckaback Fabric can be a little difficult to source however if you are keen to try this form of embroidery you can achieve a similar result using aida cloth. You never know another revival may be just around the corner.

Posted by Trish Goodfield at 7:36 am

You may have just started a new craze, Trish. Perhaps you should put a trademark on it!

This looks like fun, probably a great way to use up bit and pieces of threads.

Do you know where I could get this material? Do they sell them in shops anymore or would I have to buy off the internet?

Shay, I'm not sure if you can easily buy Huckaback Fabric. Mainly because Linen is so expensive. You could keep your eye out in ebay etc that sell second hand/vintage fabric. As I said in the post you can use aida cloth(cross stitch) for a similar effect. 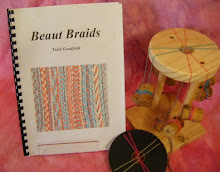 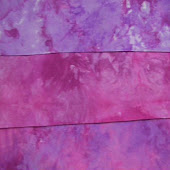 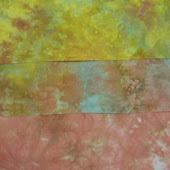 A Proud Member of BrisStyle 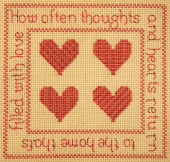 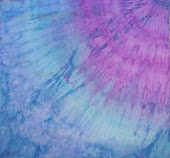 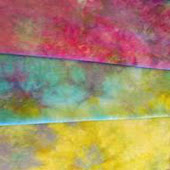 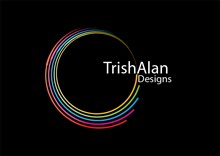